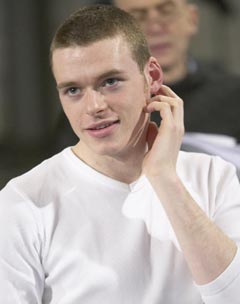 He is one of the hottest young acting talents in the business but making it on to the Eligibles list is not the only accolade Richard has got recently.
He won Most Stylish Male at the Scottish Style Awards in October and has also been named in Esquire’s Hottest Stars for 2010 list. The young actor, who starred in Hope Springs as well as the National Theatre of Scotland’s Be Near Me, is tipped for mainstream glory this year, and will be starring in the new film Chatroom and TV series Game of Thrones.

Dream date? Get some front-row seats for the theatre, and remind him of where his passions lie.

Greatest achievement in life? Overcoming playground bullying at school in Renfrewshire to become a successful actor.

Dream job? Madden says he knew in his heart that he wanted to become an actor. But the careers adviser had him down for a career in computer science.

Turn-on? Someone that supports his dreams and who is independent.

Single and celebrating? Yes, but you’re going to have to be quick for this hotshot.

Thanks to the amazing Amanda, the site has a new beautiful layout!! What do you guys think about it? ^__^ As for the rest, there is no news on the horizon, so let’s wait and hope for “A Game of Thrones” to be picked up!

TCA — HBO programming chief Michael Lombardo says the dailies for highly anticipated fantasy series “Game of Thrones” look “fantastic” and the project looks very strong for a series pickup.
“Everything looks fantastic,” said Lombardo, who’s become a fan of the George R.R. Martin books upon which the project is based. “The director got great performances. Unlike a lot of projects like this, everything was shot on location. It has such a rich texture that it looks more expensive than it actually was.”
Game of thrones The network spent $5 million-$10 million on the pilot to bring castle Winterfell to life. Lombardo says executives are “sitting on pins and needles” waiting for a rough cut in two weeks.
“The fantasy is so incidental, it has a very adult tone,” Lombardo said. “You forget it’s fantasy while you’re watching it, and that’s what I love about it.”
The pilot will employ some CGI, for backgrounds, the story’s “direwolves” (a mixture of real animals and CGI) and dragon eggs.
Also, like in the books, each family in the story will have its own color pallet for clothing and armor.
If all goes well, Lombardo said, “Game of Thrones” will be on HBO in spring 2011 — “March or April.”
“I would be surprised if it doesn’t [get greenlit],” Lombardo said. “It has everything going for it.”

Over 200 screencaptures of Richard on the Episode Three of “Hope Springs” have been added to the gallery. Also, YAY! I like the fact that finally he had more scenes in this episode! Check them out! ^_-