‘Doctor Who’: Richard Madden would ‘love’ to appear, just not with Jenna Coleman 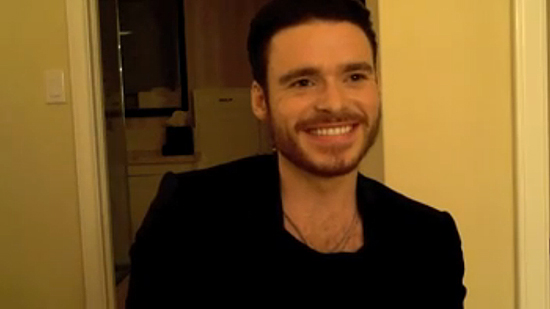 ZAP2IT – Former “Game of Thrones” star and current “Cinderella” Prince Charming Richard Madden is desperate to work on a science fiction project, but don’t expect him to mix his personal life and professional one any time soon. Though he’s been dating “Doctor Who” lead Jenna Coleman for several years, Madden says he doesn’t want to make an appearance on the BBC series — at least for the time being.

“That would probably be weird,” Madden admits to Zap2it while promoting “Cinderella.” “I’d love to be in ‘Doctor Who’ one day, but maybe not while Jenna’s in the show.”

Madden already has tackled fantasy thanks to “Thrones,” played a Disney prince in “Cinderella” and is heading to the stage in 2016. He’s also starring in the 2016 modern day action flick “Bastille Day” opposite Idris Elba, which means he’s already showcased a range of his talents.

When asked what he’d like to dabble in next, Madden admits he wants “to keep working and doing things I’ve not done before” — and that’s where his love for sci-fi comes into play. He says his dream science fiction project would be “future sci-fi stuff, like laser ships, space guns,” and his current sci-fi obsession is Halle Berry’s CBS series “Extant.”

Though “Doctor Who” certainly falls under the “future sci-fi stuff” category, Madden confirms “there’s nothing in the pipeline for that at the moment.” “Maybe one day,” he concedes.

This entry was posted by Nicole on Thursday, March 5th, 2015 at 5:21 pm. It is filed under Articles, Interviews, Richard. You can follow any responses to this entry through the Comments Feed.

Home Richard Articles ‘Doctor Who’: Richard Madden would ‘love’ to appear, just not with Jenna Coleman